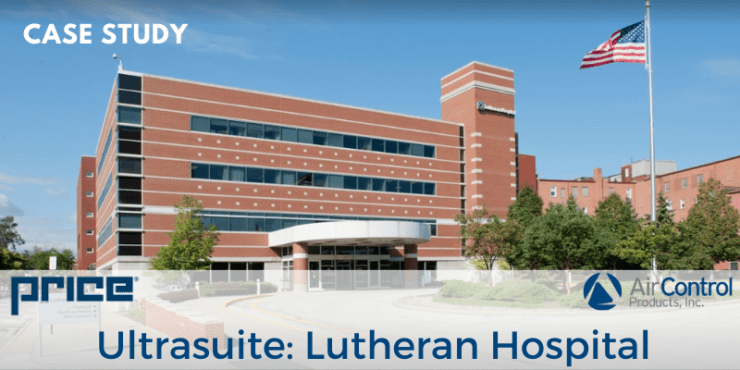 Lutheran Hospital in Cleveland, Ohio has been serving the needs of the downtown metropolitan area and the surrounding neighborhoods of Ohio City, Tremont, and Gordon Square since 1896.

A 203-bed acute-care facility, Lutheran Hospital has many specialties, including orthopedics and spine, behavioral health, chronic wound care, and more. It was subsumed by The Cleveland Clinic in 1997 and has been an integral part of their health system since.

Late in 2019, Lutheran Hospital began the process of renovating existing operating rooms within the facility. A diverse project team worked on the implementation of a new surgical space that would deliver a state-of-the-art operating room environment.

A truly collaborative effort, the design of operating room #9 was developed by an array of hospital staff, architects, engineers, and contractors, including the operating room team, Bostwick Design, Karpinski Engineering, Welty, and Imperial Heating and Cooling.

One of the biggest challenges facing the OR project was downtime. Operating room #9 is one of many at Lutheran Hospital, but all OR space needs to be maximized to limit disruption and 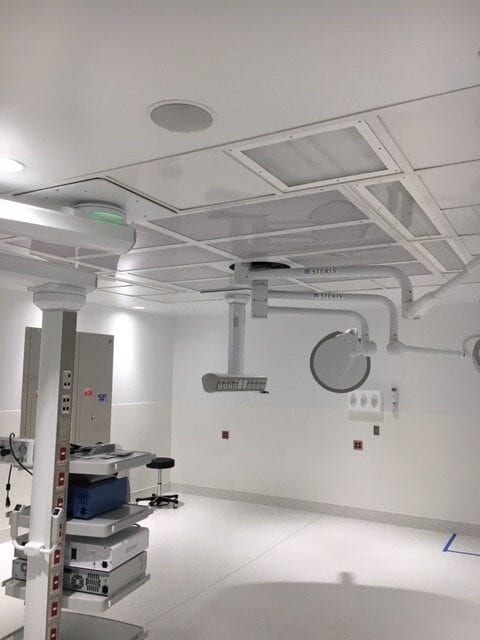 OR #9’s Plenum (space between the structural floor above and the space finished ceiling) made it difficult to meet ventilation duct needs. Limiting plenum area wasn’t the only concern and general congestion was also an issue. Ceiling space is valuable but limited in any surgical space project, with lighting, diffusers, medical gas, and equipment booms requiring space above the patient.

To build an operating room without having to make design concessions, the project team was looking for a solution that could alleviate both space complications and speed up downtime.

In October of 2019, Air Control Products hosted the Price Industries’ UltraTour, a mobile showroom that provides customers with a hands-on experience featuring the Price Ultrasuite.

Members of the project team saw Ultrasuite firsthand during Ultratour and realized how its innovative design could become a solution by eliminating interferences between air distribution and lighting.

Using a pressurized plenum, HEPA filtration, and integrated LED lighting, the Ultrasuite was embraced by the design team as a product that would reduce coordination efforts, reduce installation time, and allowed lighting and air distribution to occupy the same space. The design team embraced this new concept and changed its existing laminar flow diffuser design into a design that 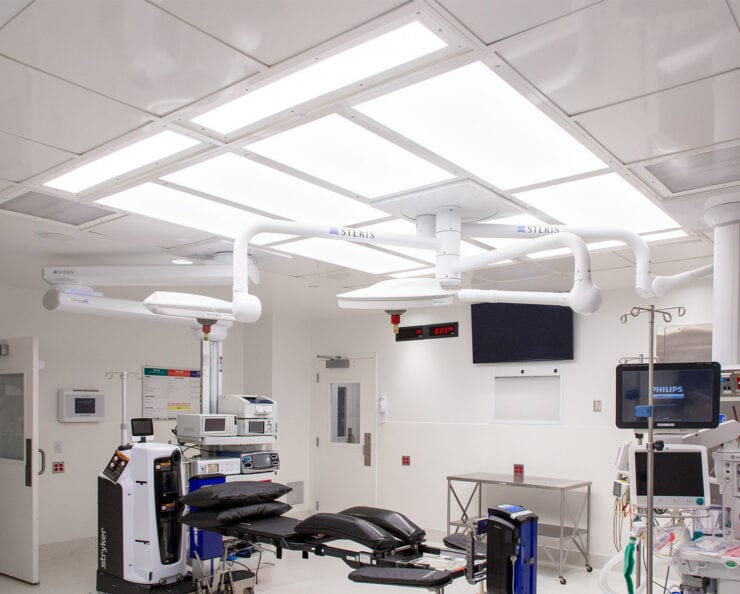 Not only did Ultrasuite provide an uncompromised operating room, its installation was faster and more simplified than other options.

Installation was also aided by Air Control Products, who hosted a pre-work webinar for the contractor to answer any questions and provide an overview of installation procedures. Thanks to the simplicity of Ultrasuite and the guidance of ACP, Imperial was able to install the system in just two days.

Staff who will be working intimately with the Ultrasuite also had overwhelmingly positive feedback.

After experiencing the Ultrasuite for the first time, surgical team members commented, “This is a thousand times better than the other systems.” And “This is a world of difference. The typical design has light dead zones in the middle, but not this Ultrasuite.”

The project team checked in for more feedback after OR #9 was fully functional and operating several weeks later.

“Everyone loves the operating room, and it gives us the best utilization and functionality that it could.” said a surgery team member. “The lighting in the room is phenomenal and is probably one of the most visualized ORs we have. The ability to control the brightness, the amount of lights, and the fact that they are LEDs gives us a superior vision and operating field to work with.

“I think because we could be hands-on with the design process, it is probably the best operating room we have here in terms of functionality and usability.”

Do you have an operating room project that could benefit from Ultrasuite? Contact Air Control Products to learn more.

Did you enjoy our Price Ultrasuite case study? Check out more photos here.